A Touch Of Fall During The Heat Of Summer? 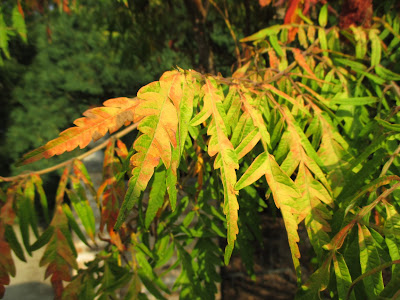 A tinge of fall coloration can be seen on the Tiger Eyes sumac (Rhus typhina ‘Bailtiger’) above!  This coloration can start early (and end up a brilliant orange/red) but despite the very hot days, the cooler nights harken to the incoming fall weather!  Some rain sure would be nice and it looks like we have a chance over the coming three days or so.  Bring it on.  We’ve had some crippling water line problems recently which have created severe challenges for watering that we hope Mother Nature will soon alleviate.  While we have some grounds staff away from work and our summer boys (Nolan and Trevor) are gone, the recently confirmed help of Larry H. and Bob K. will be invaluable for our staffing needs.  We had a solid volunteer turnout as well today with most volunteers taking advantage of the “cooler” morning! 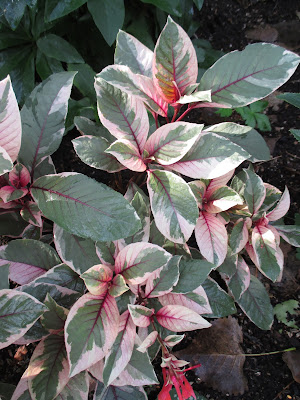 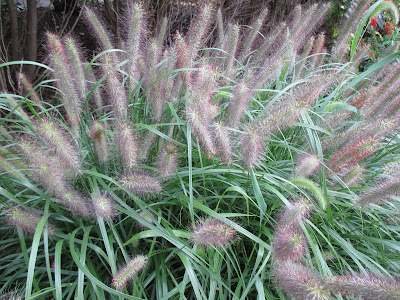 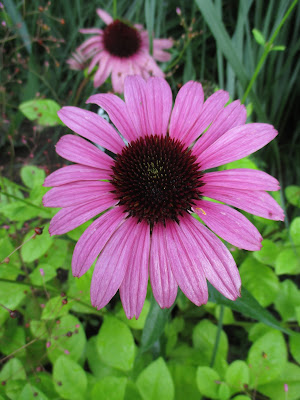 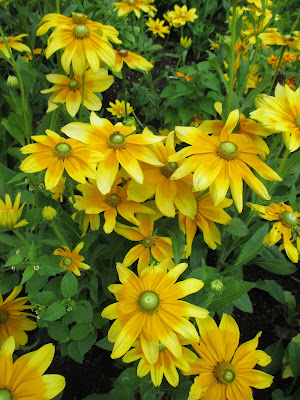 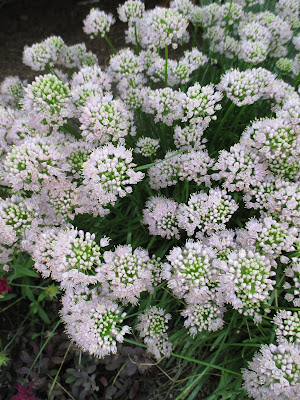 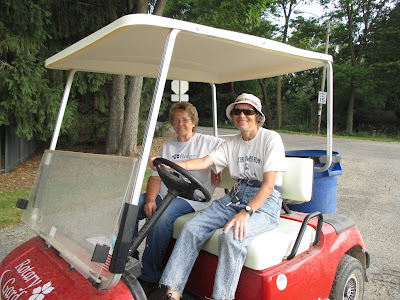 Our volunteers are as tough as ever and dealing with this recent heat is no small task!  Above are Eva (driving) and Kathy on their way out to the formal gardens for some serious tidying. They were later joined by Mary D. and this trio was quite successful in that space.  Kathy can also be seen in the second photo down.  Jenny wasn’t far away tidying in the hosta hollow garden which is her assigned garden space.  Below (left to right) are Dick H., Alan and Larry H.  The guys were shifting around plants in the yard today to make more room for tables and ultimately the tents we’ll be putting up for the Fall Plant Sale (September 12-13, 9 am – 4 pm).  All three guys shifted to other duties including sweeping, weeding and painting!  See Larry H. in the third photo down.  Dr. Gredler and Rollie (fourth photo down) did their mowing rounds.  Ed was out touching up the edging on some beds and our industrious carpenters included Ron Y., Dave, Jim and Vern today.  Maury ran out for gas and other errands and Gary worked on more labels and went out to water a lot of trees that could use a drink!  The fifth photo down shows our summer intern Molly (affectionately known as “Jimmy”) out in the Pea Patch Garden.  She finishes up this week then heads back to St. Norbert College.  Marsha helped with some clerical tasks and we saw many others today as well. 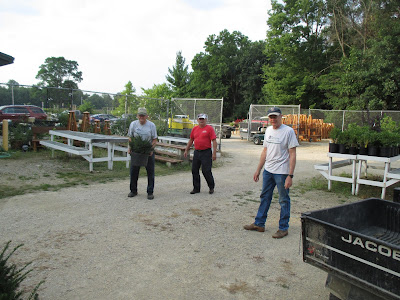 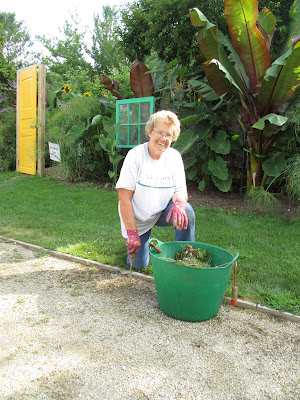 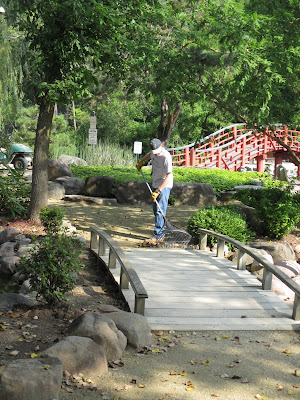 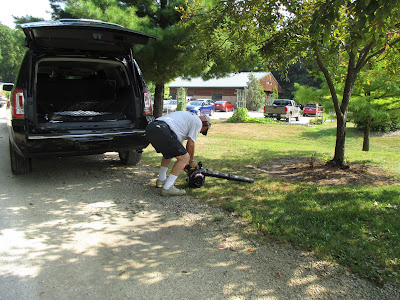 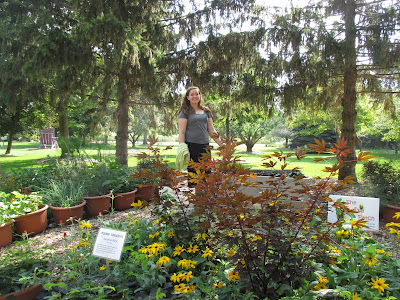 The grounds staff had a busy day today with plenty of watering too.  Cindy worked on watering two garden areas by hand, watered most of the containers and yard and had other gardening duties as well.  Big John ran irrigation and did a nice job digging up and exposing our major water leak which should be repaired tomorrow.  John also installed benches with Terry, pressure washed and had plenty of other duties as well.  Terry was in for a half day and did lots of watering for us and worked with John on some projects.  Larry H., after being a Grumpy for the morning, helped smooth out some paths that needed the attention.  I was able to tour the gardens, spray herbicide and am in the midst of Fall Plant Sale preparations as well as 2016 Budget work as well!  More photos below from the gardens this morning. 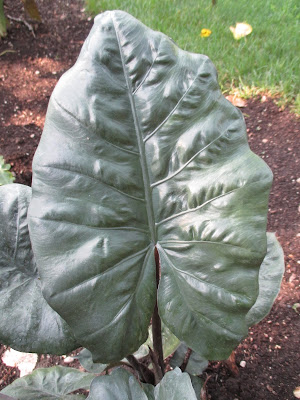 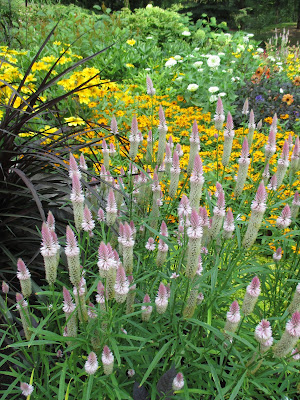 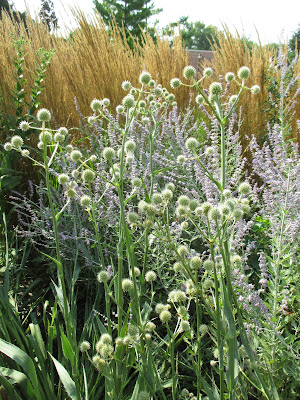 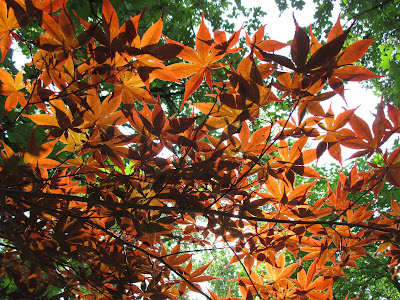 ‘Emperor I’ Japanese maple (Acer palmatum) from underneath… 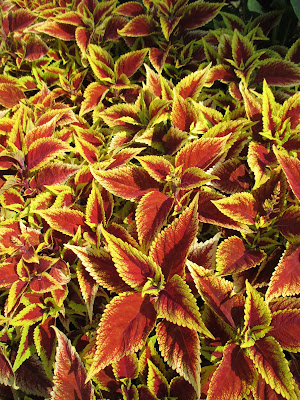 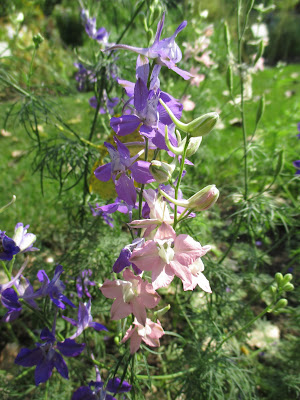