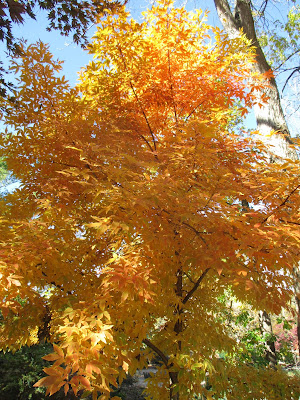 The weather was again beautiful today with sunshine warming the gardens up after a chilly start.  Nice fall color seen above on this three-flower maple (Acer triflorum) in the Japanese garden which will get an even more intense shade of orange over the next week or so.  The nice weather encouraged a strong turnout of volunteers for garden clean up efforts and other tasks.  The progress on the Holiday Lights Show (HLS) is significant daily and today was no exception.  I put out another 1/2 mile of cords with many cords put out in anticipation of what will be placed in those areas in the coming weeks.  We had a very productive day and it was again nice to see many school groups out in the gardens for the third day in a row.  Garden color and interest is not lacking this time of year as seen by many of the photos in the blog (all taken today). 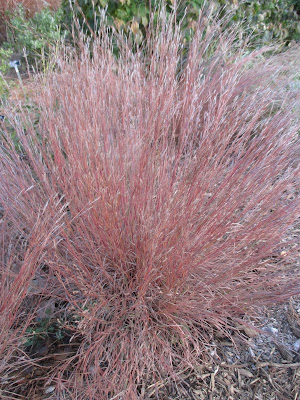 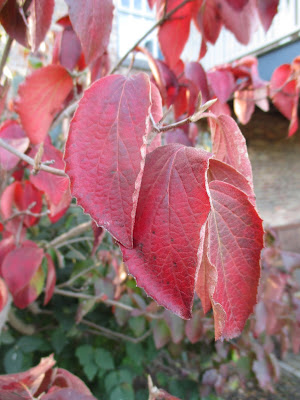 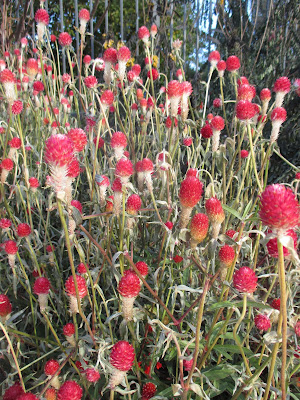 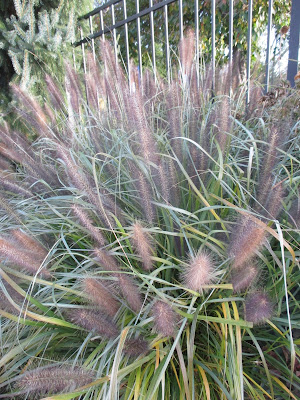 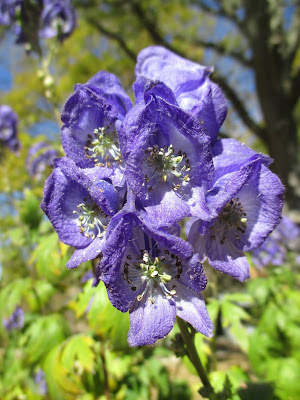 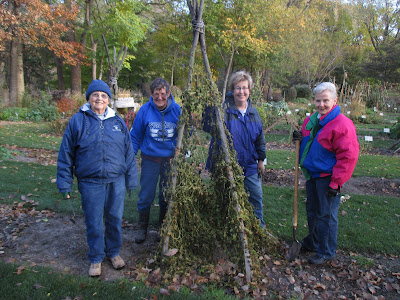 Our volunteers cleared out a lot of plants and debris today.  The “Fearsome Foursome” above of Shirley, Suzy, Bonnie and Peg (left to right) removed the plants from the Thomas Jefferson Collection which had another wonderful season.  While it’s sad to see the plants go, that area is tidy and will become something special again next year!  Directly below are Joe (left) and Alan working on clearing out one of the remaining Jungle Garden beds.  This was no small task and the guys brought back multiple loads that were quite impressive!  The second photo down shows Ron R., who along with Ron P., collected a lot of leaves from multiple garden areas.  Leaves are really coming down now but we try to keep up as best we can!  Mary and Roy came back in to finish tidying up their area of the shade garden.  Dave, Kathy and Eva (third, fourth and fifth photos down respectively) continued clearing annuals out of the entrance garden beds and this trio also did a wonderful job hauling back significant loads of debris.  Nancy N. (sixth photo down) was a big help today with putting primer on some new Adirondack chairs (built by our Grumpy carpenters) that will be on sale soon!  The seventh photo down shows (left to right), Vern, Ron Y. (in back), Jim and Dave.  The guys had a busy day at the Horticulture Center.  Dick H. ran to the dump six times and Maury went on a gas run and multiple errands.  Dr. Gredler did some mowing and we also saw Dr. Yahr, Doris, Hal and many others today including our excellent education volunteers. 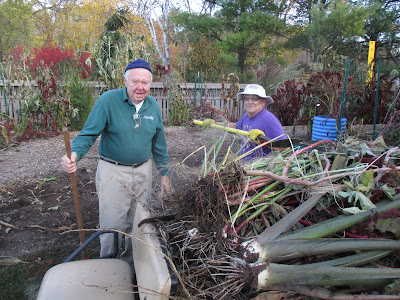 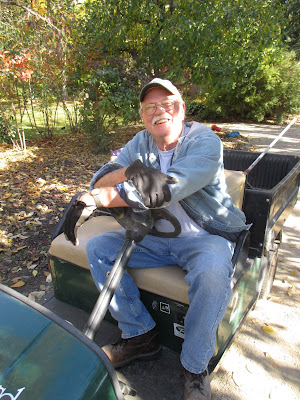 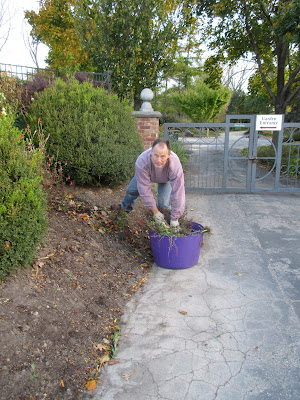 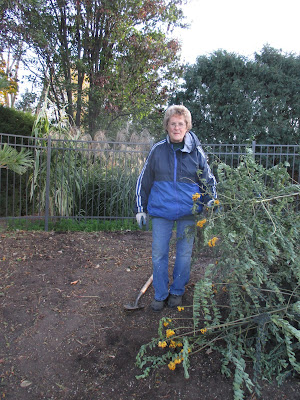 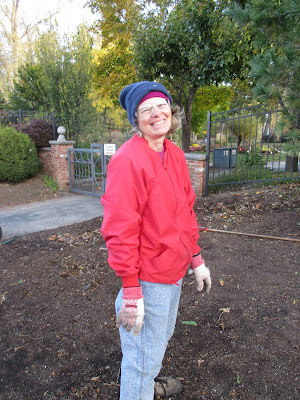 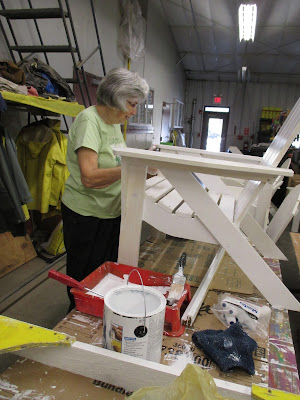 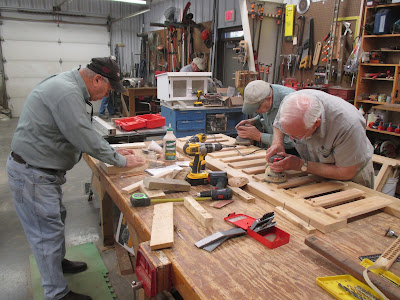 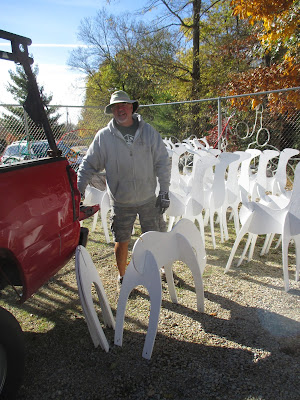 The grounds staff all enjoyed ample sunshine today.  Above is Big John working with a herd of deer for the HLS.  John ran to storage to bring back elements for the lights show (including the deer), put out displays and put up many lights out in the gardens and on a giant obelisk.  Janice helped coordinate our volunteers, decorated obelisks and had gardening tasks as well as some office tasks.  Larry H. started with some garden work (emptying containers) and spent the remainder of the day putting up lights.  Bobby K. had some repair jobs at the Horticulture Center but did get out as well with some lights.  Aside from some periodic office tasks throughout the day, I’m focused on extension cords and weaving our “web of power” out in the gardens.  More color can be seen below! 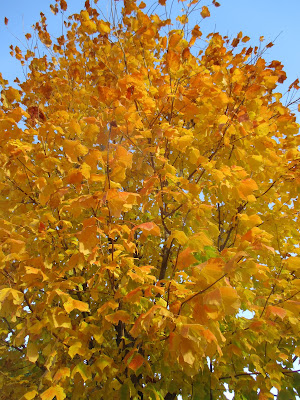 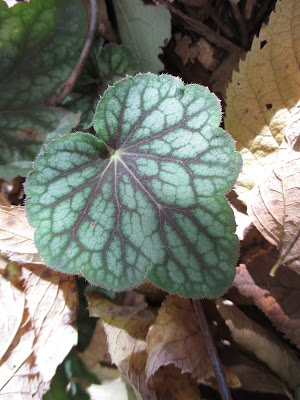 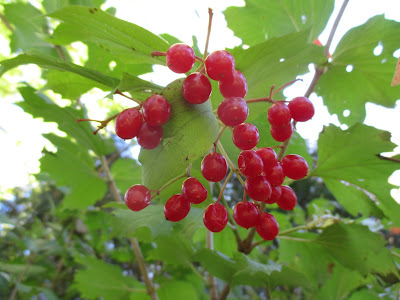 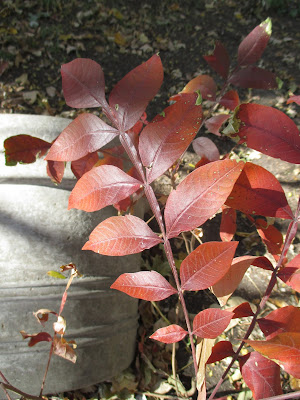 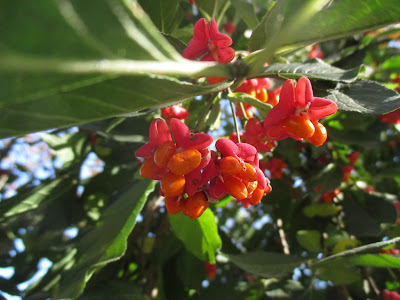