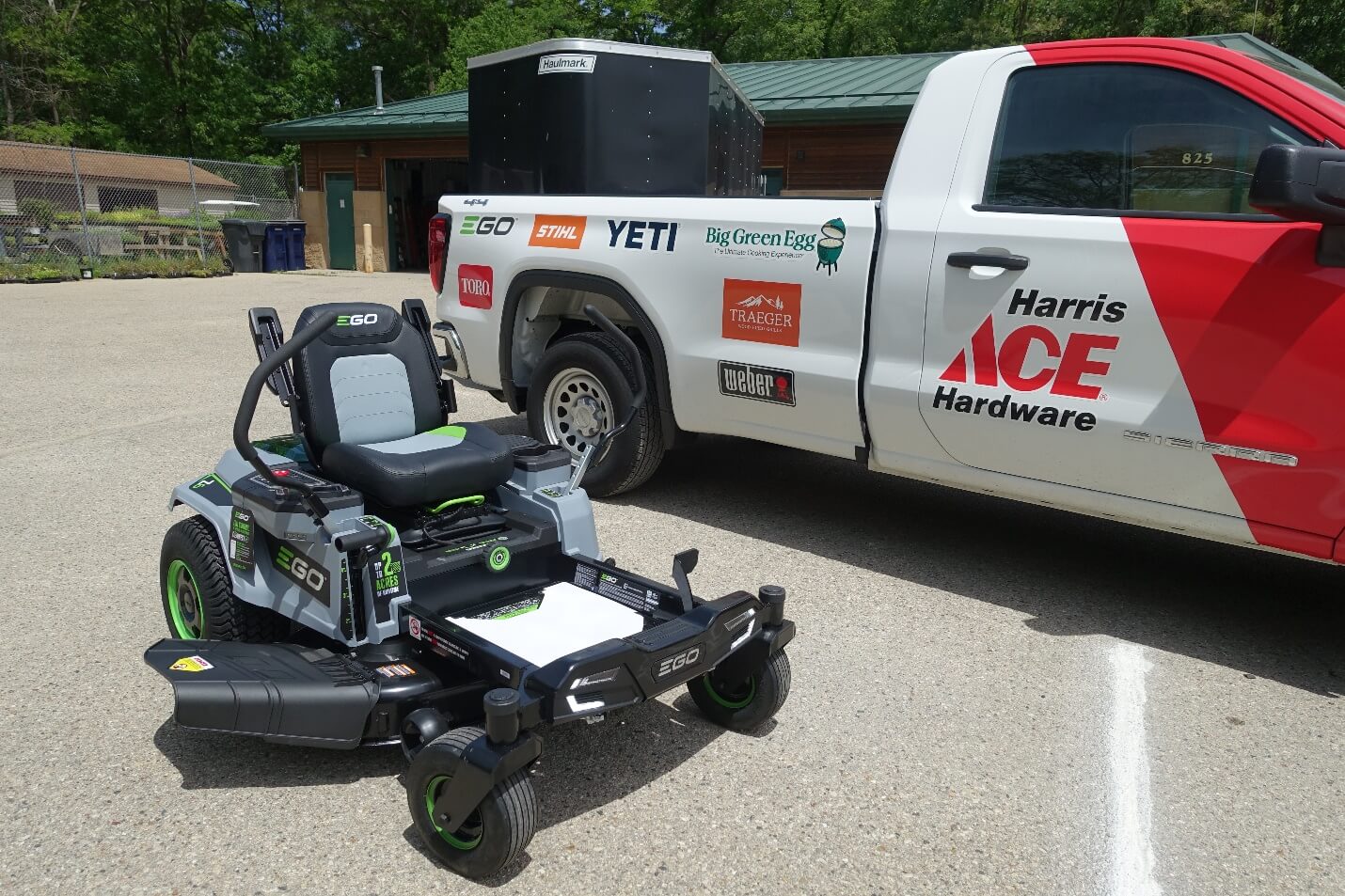 The Future Is Now

Rotary Botanical Gardens recently received a donation that helped us reach a sustainability goal: to move away from gas powered landscape tools.

Andy and Carol Phelps answered our dreams; as true advocates for earth-friendly policies, they wanted to see that the garden’s shared passion for “going green” was attained by converting our tools to electric.

Knowing this was a core investment that we would be using for many years to come, we had a lot of homework to do to decide which products to put our money towards. We did the research on what tools were available, considering power, cost, and battery compatibility.

Ultimately, we decided on EGO tools. The fact that EGO had the fastest charge times (the chargers come with small fans that pulls away heat from the batteries), a riding mower in its fleet, and that all its 56V batteries work on all of its tools made it a no brainer to go with EGO.

The benefits of shifting to battery powered have been numerous and the new tools have quickly become staff favorites.

The most obvious advantage is that compared to gas, they are a better choice for the planet. The Environmental Protection Agency (EPA) has estimated that running a lawn mower for an hour generates emissions closer to 350 miles of car travel, about the distance from Janesville to St. Louis.

As someone who has used gas powered tools for many years, I can tell you from firsthand experience that it isn’t a great sensation to run a backpack blower or snow blower for an hour or two and smell like fumes, not to mention breathing in the engine exhaust.

It is common for Garden staff to experience frustration in getting gas powered tools to start. Mixing fuel represents an environmental issue in itself as run off from mixing with oil or filling a gas tank ends up on the ground and eventually into our soil and water. California has already banned the sale of gas mowers and blowers, while Illinois and New York are considering similar action.

Electric tools mean no fuel mixing, pulling a cord, wondering if you have a bad spark plug, clogged carburetor, dirty air filter, or diagnosing something else. The reliability of putting a fresh battery in and going to work is refreshing.

But do they work as well as gas power?

A common question is, ‘Are the tools powerful enough?’ After using them for a few months, the resounding answer is YES!

All the tools are at least as powerful as their gas counterparts; the handheld blower and hedge trimmer are distinctly stronger. The tools run much quieter than typical gas, although hearing protection is still required for the operator, and are made more efficient in part because of their brushless motors.

We also love the innovation that EGO brings to make tools better. One of these features includes string trimmers that are automatically wound and require no bumping. The hedge trimmer has a blade that cuts on both sides and a feature that turns your grip, to avoid being in a painful position.

The chainsaws have an easy chain tension feature, and the blower pushes out air at over 200 mph. We can’t wait to test out the two-stroke snow blower this winter.

Saving the planet and dollars

Furthermore, the timing of the transition could not have been better. With gas prices nearly doubling from what they were last year and at times nearing $5 a gallon, the cost to keep our old gas-powered tools running would have been exorbitant.

The initial sticker price of electric powered tools is higher than gas, but the cost savings is realized quickly when you factor in fuel and maintenance costs.

We aren’t the only ones who are switching over to electric power tools. Several other public gardens are doing the same, as well as the general public, as market research via the Freedonia Group expects sales of electric powered landscape tools to reach $14.1 billion by 2024.

Going green is a hill we’re proud to stand on; We hope that others will consider our experiences with battery powered tools when it comes to purchasing their next landscape tools.